What is going on?

In 2013, Matt and Jody were living on the Oregon coast, raising 8 children and running a successful roofing company.  All of that would change when a friend of theirs invited them to her wedding at a small chapel in Nacogdoches, Texas.  It was at this wedding that they realized their friend was being married into a destructive cult - The Church of Wells.  (For the entire story, please listen to the Cultish interview).  At the wedding, Matt tried to reason with their friend to leave, but she insisted that leaving her wedding would be equivalent to "denying Christ".  Alarmed and worried for their friend, Matt and Jody would return to Oregon, pondering how they could help her get out of this cult.

A year later, in 2014, the Myer family once again made the journey from Oregon to Texas.  This time they were hoping to find their friend and reason with her to finally leave the cult.  While in Wells, searching for their friend, Matt received a phone call.  This call involved a young man who wanted to escape the Church of Wells but needed assistance.  By God's providence, Matt, along with others, were able to assist this man in leaving the cult, obtaining housing, and beginning his life over again.  That was in March of 2014.

Another event happened in March of 2014 that would change Matt and Jody's life in a major way.  While in Wells, they bought a little house at the end of a quiet dead end street.  The house had a friendly neighbor on one side, and an open cow pasture on the other side.  At the time of this purchase there was no Church of Wells building.  This is a very small yet very important detail, as the Church of Wells consistently and dishonestly claims that Matt and Jody bought their home just so they could be next to their meeting place, in order to harass the Church of Wells.  As you can see from the photos below, their claim is false.
​
After purchasing this little home in Wells, the Myers would return to Oregon and make plans to permanently move to Texas.  Moving to Texas was something they had considered for some time due to the state's great homeschool laws, inexpensive property, and a ministry opportunity in Houston.  The plan was simple: move into the little house in Wells for a few months, purchase a home in Houston (two hours south), move down to Houston and then make the Wells home a rental house for additional income.

Things didn't go exactly according to plan - at least not according to the Myer's plan.  The Myer family moved to Wells in October 2014 and were immediately confronted with the darkness of the situation with their neighbors.  Within days of arriving in Wells, Church of Wells members started circulating false reports about the Myers, harassing and accusing them on a regular basis.  Fabricated reports of Jody "weeping" and "being soft" to the group, along with reports of Matt being " physically violent" and "angry" began to circulate among their members.  Groups of Church of Wells men would stand on the foundation of their church building, hurling insults and curses across to the Myer family - even going so far as to call Matt "an uncircumcised Philistine waging war against the armies of God"!

Over the next several months, an increasing amount of interaction with the Church of Wells members, coupled with multiple opportunities for the Myer family to assist people who were leaving the cult, led the Myers to consider staying in Wells long term. In 2015, Matt and Jody Myer decided to permanently settle as residents of Wells, Texas.  Little did they know what struggles, opportunities and joys this would bring.

Since 2014, the Myers have seen much conflict and much heartache - having had front row seats to watch Satan and the Church of Wells do what "the father of lies" does best - kill, steal, and destroy.  But they have also witnessed God shedding light into this dark place - ultimately bringing light into the heart of His children whom He loves.  ​Their mission is simple: Proclaim Christ, expose darkness and be a place of help and refuge for those who are seeking to leave the destructive and heretical group known as The Church of Wells - The Sean Morris Cult.

If there's any way that Matt and Jody can assist you, please don't hesitate to contact them.  They'd love to hear from you. 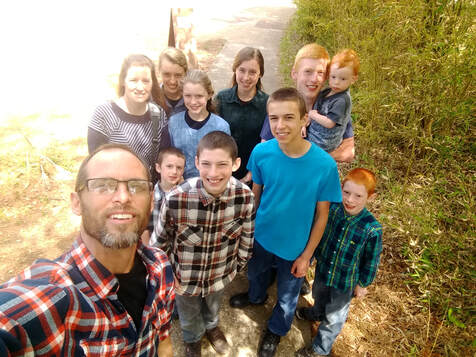 ​Therefore, having this ministry by the mercy of God, we do not lose heart. But we have renounced disgraceful, underhanded ways. We refuse to practice cunning or to tamper with God’s word, but by the open statement of the truth we would commend ourselves to everyone’s conscience in the sight of God. And even if our gospel is veiled, it is veiled to those who are perishing. In their case the god of this world has blinded the minds of the unbelievers, to keep them from seeing the light of the gospel of the glory of Christ, who is the image of God. For what we proclaim is not ourselves, but Jesus Christ as Lord, with ourselves as your servants for Jesus’ sake. For God, who said, “Let light shine out of darkness,” has shone in our hearts to give the light of the knowledge of the glory of God in the face of Jesus Christ.
​2 Corinthians 4:1-6